This subject is actually one that someone else suggested I write about, and I’m building here on some things I’ve written on this topic earlier. I’m going to be branching out from visual novels a bit for this, but it all ties back into the sort of approach I decided to take with Complex Relations.

The question which got me focused on this topic was, “why are there so many VNs with obtuse choices and unclear conditions for route division, which practically require savescumming to navigate?” It’s not just a rhetorical question; a lot of players don’t enjoy savescumming or having to resort to a guide to get their intended outcomes in a game, but still, games like this only exist because game developers make them. They don’t just appear out of the ether. So, why do developers design games this way? Do they have good reasons for that?

I think some of the key incentives behind the use of choices in visual novels lie in giving the player a sense of agency and exploration. Choices, even minor ones, can help the player feel invested by getting them to feel like a part of the narrative, and exploration can make a game feel like a richer experience. But both these elements, if mishandled, can lead to results which are… kind of stupid.

JRPGs offer a helpful framework to examine this. Most JRPGs offer pretty linear narratives; exploring the game doesn’t change the outcome of the story. But it does give the player opportunity to engage with the game world in a way which makes it feel deeper and more alive. 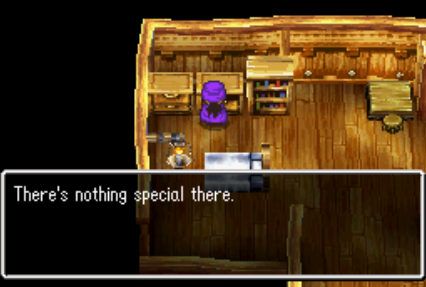 Experiencing the depth and richness of an empty drawer.

RPGs obviously offer easy ways for players to explore their environment, but can you offer that sort of sense of exploration in a visual novel? Sure. That’s why there’s more to the choices in most VNs than just offering a chance to decide between routes.

Choices in visual novels can allow the player to explore the consequences of different actions, and cultivate the feeling that the characters are engaging with the world around them, rather than acting out roles in a static narrative. I think Fate/Stay Night (the original visual novel, not the vast media franchise that spun off of it,) did an unusually good job at this.

Fate/Stay Night is full of choices, and most of them either determine whether you continue the game or get a bad end, or allow you to choose among a selection of slice of life scenes. The bad endings are spaced out after the choices so that they're able to draw out the tension and make the player wonder if they chose right, but the uncertainty doesn’t drag on after the situations are resolved and leave the player wondering if they’ve locked themselves into dead ends. The slice of life scenes are generally fun enough to be worth seeing, but the pacing doesn’t support cramming all of them into a single playthrough of the game, and by choosing between them the player can gain some sense of agency while exploring how the characters respond to different situations. The result is a much richer experience than the game would have offered if it had only had a handful of choices.

Just like some RPGs encourage tedious exploration which only drags on the game though, some VNs present the player with choices which don’t lend themselves to a fun style of exploration. Making the right choices becomes a form of gatekeeping on the desired outcomes, rather than a fun activity. 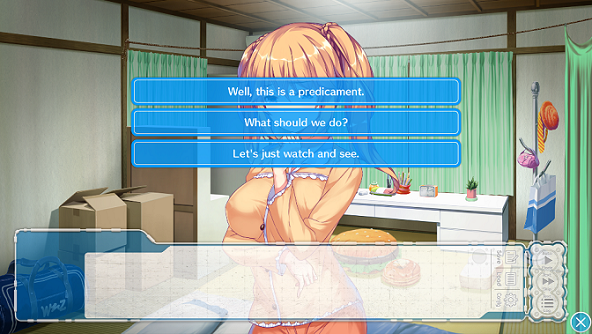 Does anyone have a three-sided coin I can flip?

So, how does a developer keep the choices in their game fun and engaging? This isn’t necessarily an exhaustive list, but I think these are some of the considerations that come into play.

-The choices should be intuitive, if not necessarily obvious. The player should be able to make logical assumptions about what kind of outcomes are likely to result from the different options.

-The choices should be relevant. The player should care enough about the things they’re being asked to make decisions about to want input, not feel like they’re being arbitrarily forced to make a decision.

-The choices should lead to meaningfully different outcomes in the near term, not lead to a few slightly different lines of text which results in a different route branching several hours down the line because the protagonist expressed different feelings.

-The content the choices lead to should be interesting enough that players actually care whether they see it or not.

There are a lot of different ways to satisfy these considerations, but I think handling them well is something that games with fun decisionmaking elements consistently have in common. I’ll be doing my best to make Complex Relations feel satisfying on that count.

A hot summer romance for three